We went to the AIRR Drone Race Competition in Austin, Texas on December 6, 2019. Lockheed Martin and the Drone Racing League were wonderful hosts of an exciting VIP experience just for us Texas Chief Science Officers. We were able to get personal, interactive experiences with the drones, pilots and drone flight simulators. We met drone pilots such as Gabriel Kocher, Paul Nurkkala, and Alex Vanover. Alex Vanover is the youngest pilot in the Drone Racing League at the early age of 19! 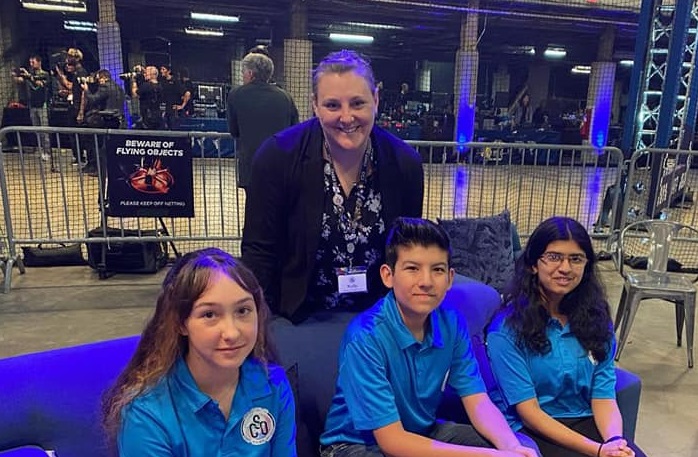 The pilots were fun and taught us how to pilot mini drones. We also got to engage with a drone flight simulator, but it was interesting how it felt way different than flying the actual drone. After our hands-on experiences with drones and simulators, we were able to sit front row for the competition. The artificial intelligence-powered drones raced for the best time to complete the obstacle course and the winner received $1 million dollars as their grand prize from Lockheed Martin! The winner of the race had the chance to win an additional $250,000 if they could beat the human-piloted drone. Unfortunately, the human drone won, but it was still cool to see the two race against each other! We had lots of fun and we would love to do it again next year.

As an AI and robotics enthusiast, an artificial intelligence-powered drone race was right up my league. This event was dripping with STEM: science to consider the aerodynamics and other environmental factors for the drones when building and programming them, technology with the drones themselves, engineering for the design and programming, and, finally, mathematics for the insane amount of math (linear algebra, multivariate calculus, etc.) behind the artificial intelligence.

For the drones to fly, they don’t see the world in pictures or colours like we do: computers only know numbers, so every pixel of the image they see is converted into numbers. From there, the computer crunches those numbers to process what they see and then take action from it. Computer vision, as this process is commonly called, is an insanely difficult challenge in the field of AI: whereas we can easily separate a cat from a dog upon first glance, we don’t have a nice way of programming those instructions. That’s where machine learning (a subset of artificial intelligence) comes in: the humans program a program to make the computer teach itself and make the working program; oddly enough, this means that we still don’t know how to tell the computer the difference between a cat and dog or obstacle and wall, but we do know how to make a program which can teach a program vision. The most popular computer vision algorithms today are an exchange between speed and accuracy, and, as we saw during the race, the faster a drone goes, the more likely it is to crash. As the drone race proved, right now AI is fast, but not necessarily fast enough; however, in the future, we will definitely create a better balance between speed and accuracy and eventually beat the human players.