The following post is from CSO Marissa recalling her recent trip to Kuwait.

As a second year Chief Science Officer who had been selected to travel to Washington DC as a representative for the program in Arizona twice, one for the 2018 STEM Ecosystems Conference and the second for the first Chief Science Office Program International Conference, I was grateful for those opportunities alone. For I had no idea about the possibility of traveling overseas to a different country as a representative for the Arizona Leadership Council within the program. But as life has it, I was asked if I would travel with program Director of Student Success, Kelly Green and Director of Internation Relations Jake Lounsburry, if I would travel with her to Kuwait to attend the Fall Cabinet Meeting there as well as go with her to school site visits. Coincidentally the trip landed on my birthday, what better gift than be able to see and experience not only a whole new branch of the Chief Science Officer program but also a different culture?

For the trip I went to their fall cabinet meeting, the CSOs were able to experience the Fab Lab, which was a makerspace and each room had a different aspect of STEAM for the students to experience like electricity, 3D printing, etc. The exciting part for me is that not only I got to watch students get excited about STEM and hear things like “I had no idea I could do this” and be engaged and eager to learn more. I also got to see students who had met less than an hour ago, bond over connecting circuits or programming a Lego robot. The best example of how STEM brings people of different culture, languages, and thinking was myself this time. I connected with several students, on not only a level of we were both Chief Science Officers, not only that we were both high schoolers, but that we were a couple of teenagers experiencing an amazing opportunity together. Me being there was impactful for them, we were discussing ways on how to reach hundreds and hundreds of students in their community. After hearing what I have been able to accomplish, they were inspired to do more and began believing in their own ability to change their community.

The most impactful part for me was the site visits, though I only was able to go to three it was eye opening to see the students that were CSOs and how, in the schools we visited, they were so supported by their headmasters and advisor. While I was talking to the Chie Science Officers and telling them about what I’ve done and had problems with, they were thinking, “Woah, it’s not just me. There are other CSOs, doing what I’m doing, struggling with what I’m struggling with”. Those site visits alone impacted them if by only they were able to see the reach of the program and how we strive to make sure each of our CSOs succeeds. There CSOs who were shy and others who grew more comfortable as we talked, but all of them had a clear action plan, some already began working on them, and all of them understand that being a Chief Science Officer meant stepping up and being a leader.

Going on this trip not as a student, but as a member of the International Project Team it was impactful for me to see the adult side of things, the discussions after the students leave an event, on how it went, what can we change to do better, and what to look out for in the future. When it comes down to it, I still view myself as a just student, so I was hesitant at first to contribute to discussions, and just listened at first to what was being said. Then I contributed to the discussion from a student’s perspective and my words were actually changing things about the program because the adults wanted to know what I thought, saw the value of it, and applied it to make a difference. There was a problem with some CSOs not having a clear idea about what an action plan should be and we were trying to pinpoint where the students lost the focus, then I pointed out that it may have been when Action Plans were delivered to the students. Then together we discussed on making a “menu” of sorts for first year CSOs to help focus their ideas into main action plans like teaching others, starting a club, holding a

STEAM Event, etc. With the focus the first CSOs are not overwhelmed about what they should do, and with the help of second year CSOs, advisor, and other resources they will be fully supported.

Overall, I didn’t have an expectation for what I would be able to do on the trip. But I feel that it was successful. As a team Kelly, Jake, and I were able to discuss what we needed to change about the implementation plan for the program in Kuwait so the implementing will be smoother not just for Kuwait, but for Kenya, Canada, Columbia, and the numerous other countries that are joining. Throughout the whole trip I never felt like a tag along, a CSO that was there just to show the Kuwaitis the program’s reach. I knew that my opinions and perspective was valued and from my mouth to Kelly and Jake’s ears, came ideas and plans that we started writing down as soon as later that day, and were becoming real. I am forever grateful again to the program to opening my eyes and ears to see and hear the very thing I have been telling others, Chief Science Officers is a global network and together with our diverse thinking and constant communication, we can change the world. 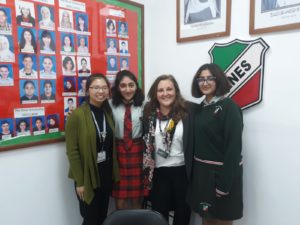 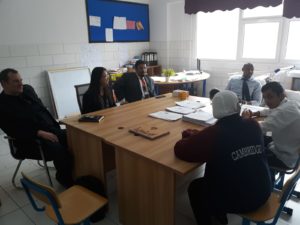